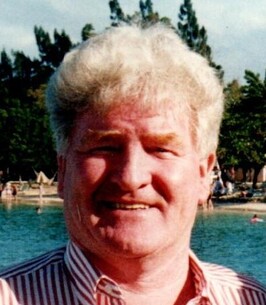 Born on June 22, 1936 in Dundee, Scotland. Died suddenly and unexpectedly at his Nepean home as he wanted on July 19, 2022. Mike was the youngest of 8 and is survived by his sister Cathie Cahill in Dundee, Scotland.
Mike made a name for himself as a young, popular, local "footbaw" player in Dundee.He would go on to play for Portsmouth F.C and turned down a CAP (chance at playing) for Scotland's National Team so he could make his way to Canada. During his service years Mike was given special privileges and extras while playing on The Arm Team.
Mike met Marjorie at the dancing and they subsequently married on March 21st 1959. They were married for 54 years less 8 days at the time of Marjorie's passing in 2013
In 1964, paying his own way to Canada, Mike worked and saved for 9 months so he could send for Marjorie and 4y.o Craig (1960-2019) to meet him in Canada. Mike worked at E.B Eddy in Hull, while Marjorie waitressed and worked at a local drycleaner. They strived for a better life in Canada.They bought their first house "out in the country" in Glen Cairn, Kanata. Later moving to what became their home of 40 years in the new sub-division of Bell's Corners called Lynwood Village. they would have Heather here in the great snowstorm of 1971. I believe some neighbours helped to shovel a path down the driveway so Mike could get Marjorie from the house to a waiting car on the street to take her to the hospital.
Mike earned his apprenticeship as a slater before leaving Dundee. Over the next 50 years Mike operated business under the names, M. Gilchrist General Contractor, Scotty's General Contracting and retired under Dundee Roofing. He built and repaired stone and brick chimneys, walls, patios, walkways, and other concrete and brick work before returning to roofing Ottawa and area homes.
Mike and Marjorie retired to Clayton Lake in 2006 where Mike was able to go fishing to his heart's content. They lived there until Marjorie's passing.Mike eventually settled once again in Bell's Corners and was quite content there.
Mike was 1 in a million. He had personality and a way about him like no other. Mike was, as Nat King Cole sang, "Unforgettable."
Mike's strong Scottish accent never weakened, nor did he want it to. He was asked on occasion if he was putting it on. Mike was a proud Canadian but also remained a proud Scotsman. He cheated at cards and games if he thought it would help him win. He could fall asleep while getting a haircut. He enjoyed music and singing. Carrying a tune didn't matter. He enjoyed fishing, a good ghost story and anything that related to Scotland. Especially current events and Scottish politics.He said things like "Drink this, it'll put hair on yer chest" and "och away wi ye."
We have a lifetime of treasured memories spent with Mike, yet we still wanted more time with him. Without a doubt we will laugh and cry and laugh again, and again while recounting our "Life With Mike." He was 86 in body with the heart of a lion and fire in his soul to the very end.
Uncle Mike/Mick will be sorely missed by family in Canada, Scotland, England, and Australia.

Good Night, And Joy Be Wi Ye A' - A Poem by Alexander Boswell