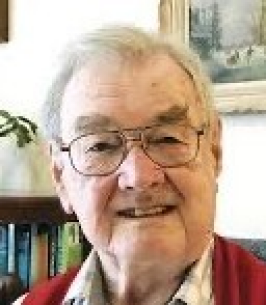 A celebration of life and memory sharing, will take place August 9, 2022 from 2:00-5:00 pm at Almonte Civitan Hall, 500 Almonte St., Almonte, ON. Please note change of location. Details at www.crgamble.com

In his later years Don often reflected that he’d had a great life; curious and enthusiastic about life and learning, he was always looking forward to the next experience.

After his youth in Amherst NS during the depression years, Don began his studies in chemistry at Mount Allison University, then McMaster University, and finally completed his PhD in radiochemistry at the Massachusetts Institute of Technology. It was while at MIT that he met Billy in the local sailing club. Following their marriage in 1952, they went to Norway where Don took a post-doctoral position, and where their daughter Anne was born; then they were off to Vancouver where Don taught at the University of British Columbia, and daughter Karen and son Peter were born. In 1959 Don and his family relocated to Ottawa to begin his long career at Carleton University. Over his years there he inspired many students – being famous for his signature yellow tie, he was very touched one day when everyone in a class showed their appreciation by wearing yellow ties that one of them had made. After his “retirement,” he made several trips to Indonesia and Australia to teach science courses. He was awarded an honorary Doctorate in 2011 and continued teaching at Carleton as Professor Emeritus. In retirement he was also President of the College and University Retirees Association and was awarded that association’s Tribute Award in 2018.

There was much more along the way. Don was an amateur musician, playing the flute in several university orchestras; a canoeist and camper with his young family; and a world traveller, visiting dozens of countries with the family and later continuing to explore with Billy through their eighties. Don – and later Billy, just to keep up - became a pilot, flying his Cessnas to vacation spots, or for dinner in Quebec City – then, ever the teacher, he became a flight instructor. Don and Billy were also farmers. At their first farm in Renfrew county they kept a wide variety of livestock and a breeding herd of Maine-Anjou cattle, and Don served as President of the Canadian Maine-Anjou Association. They later moved to a smaller farm near Carp, and then into the town of Almonte, where Don become active in the community: he founded and hosted the popular Almonte Lecture series that featured speakers on a wide range of subjects, and the Learning in Almonte program. In recognition of his contributions to the community, the Town of Almonte honoured him in 2017 with a celebration and plaque. Don loved stimulating conversations with interesting people, and held court during their many dinner parties. He was a patient teacher, leading his children, and later his grandchildren, through many projects, carpentry and otherwise.
The family extends their sincere gratitude to the staff at Orchardview by the Mississippi for their care and compassion, which Don so appreciated. Those who wish may donate to one of his scholarships at Carleton University (carleton.ca/advancement/giving). Yellow tie optional.
A Celebration of Life and memory sharing, will take place on
Tuesday, August 9, 2022 from 2:00-5:00 pm at
C.R. Gamble Funeral Home & Chapel Inc..
(127 Church St., Almonte, ON. 613-256-3313)
Condolences & Tributes: www.crgamble.com